Changes by Justin Bieber: This musically slight, blue-eyed R&B will be of primary interest to those who care about Justin Bieber—his ups, his downs, his marriage, his faith. To this end, the lyrics paint a fairly encouraging picture. Only three of the 16 songs contain anything lewd or crude, and in two of those cases it’s guest rappers doing the offending. Of course, it was Bieber who did the inviting. So say that he still has some changing to do and that the title track’s spoken outro, “People change, circumstances change, / but God always remains the same,” is a promising sign—and that the verdict on which is more annoying, his flaunting of his tattoos or his flaunting of Auto-Tune, is still out.

All the Pleasures of the World (Deluxe) by Crayon Fields: The melancholy folk-pop of these Aussies might sound like something extracted from a time capsule buried in the ’60s, yet there’s nothing hermetic about it, not with Geoffrey O’Connor’s breathy vocals and Chris Hung’s twinkling glockenspiel mapping out a spaciousness rendered luminous by judiciously administered reverb. All of which is to say that even though this album first came out 11 years ago, it doesn’t sound dated, making it ripe for discovery by the many who missed it the first time around. The few who didn’t miss it get rewarded as well, namely by three non-alternate-version bonus tracks as good as any of the official 10 and by two bonus covers that prove there’s nothing necessarily hermetic about ABBA or Roxette.

Texas Sun by Khruangbin & Leon Bridges: Here’s a curiosity: a four-song EP in which a guitar-bass-drums trio specializing in sparse, border-town psychedelia and an up-and-coming soul singer specializing in smooth, retro soul explore and test the limits of their compatibility. Even curioser: If you like what they achieve together, you’ll like what they’ve already achieved on their own even more. Not that this mesh never takes. It’s just that about half of it sounds more tentative than a musical marriage made in heaven should. Where it gels the most is the nearly five-minute funky space reincarnation “C-Side.” Where it gels the deepest is the nearly seven-minute “Conversion,” Bridges’ brooding testimony to the power of God’s grace and to the joys of repurposing Isaac Watts’ “At the Cross.”

Shout About Love by John Swaim: The CD Baby “album notes” in their entirety read as follows: “This is my latest CD release and you should buy one!” And you should! Is Swaim gospel? Texas swing? Country? Comedy? The answer is all of the above—pressed down, shaken together, and running over into songs that illustrate why he calls himself a “musicianary.” The cleverest refrain finds him “hank, hank, hankerin’ for heaven” while recalling the Hanks Williams and Thompson. The wisest verse finds him realizing that he’s his own biggest hurdle in the race he has to run (“Over Me”). He’s quite a storyteller too. His obviously unscripted spoken introduction to “Union Gospel Tabernacle” sounds like an outtake from Ken Burns’ Country Music that should’ve been left in. 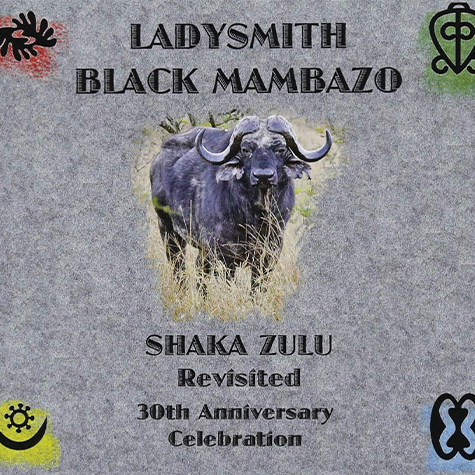 The recent death of Joseph Shabalala has put Ladysmith Black Mambazo, the South African a cappella vocal group that he founded in 1960 at the age of 18 and led until he turned it over to his sons in 2008, back in the spotlight. Frankly, the spotlight should never have left it. After being featured on Paul Simon’s Graceland, the group, which had already recorded over 24 albums, became an international sensation. (The fascination with all things South African that developed alongside the world’s accelerating opposition to apartheid didn’t hurt either.)

The group’s membership numbers have fluctuated between six and 12 over the years, usually settling in at around eight or nine, with at least 20 different singers having come, gone, or stayed. But the Ladysmith Black Mambazo sound—a creamy, instantly recognizable concoction derived from the Zulu mbube and isicathamiya singing styles—remained (and remains) consistent. The main difference between the Joseph Shabalala–led group’s 1987 Warner Bros. album Shaka Zulu and the Tommy Shabalala–led group’s 2017 rerecording Shaka Zulu Revisited: 30th Anniversary Celebration is that the latter adds an 11th cut: “This Little Light of Mine.”

Joseph Shabalala didn’t become a Christian until his mid-30s. But once he did, gospel themes abounded. Even non-Zulu speakers oblivious to the meaning of 1985’s Ulwandle Oluncgwele (“Red Sea”) couldn’t misinterpret the cover art’s baptismal imagery or the “Amens” and “Alleluias” concluding almost every track. And although Shabalala described his group’s message as one of “Peace, Love and Harmony,” what really came (and comes) through is joy.