Film shouldn’t be just another war movie, but its intensity lacks insight

It’s a little hard to understand what made The Outpost one of the best-reviewed releases of the last few months. Certainly the Afghan War drama, which hit streaming services on July 3, has the kind of pedigree the critical class would be most likely to praise.

Based on an exhaustively researched book by CNN newsman Jake Tapper, it tells the harrowing true story of how 53 U.S. soldiers faced up to 400 Taliban fighters from the low ground in Nuristan in October 2009. Beyond that naturally gripping setup, it also offers a complex theme—honoring military valor while indicting the policies of unending conflicts with ill-defined “hearts and minds” objectives. That’s what put members of Bravo Troop, 3rd Squadron, 61st Cavalry Regiment, in such a dire position.

Yet even when we grip our seats at the taut action sequences or smile at the band-of-brothers camaraderie, there’s something hollow and disconnected about the whole. It’s a strange experience seeing courageous young countrymen’s sacrifice move us so little.

Part of the problem is the characters rotate out of the story every few minutes—killed or reassigned. But it’s also that, with a couple of notable exceptions played by Orlando Bloom and Scott Eastwood, those who remain often feel interchangeable. They have quick, clichéd markers of personality—the wisecracker, the mama’s boy—and little else.

Take one private who’s ostensibly a Christian. He speaks with the same unrelenting torrent of profanity and sexual allusion as every other character. (Note: The language alone would merit a strong R rating even if it didn’t come with realistic violence.) When he tries to reassure a fellow soldier there’s some deeper meaning in the terror they’re experiencing, he’s only able to offer platitudes like “God works in mysterious ways. He has a plan.” His comrade’s response—“God’s plan is our chaos”—seems the wiser assessment of their situation. 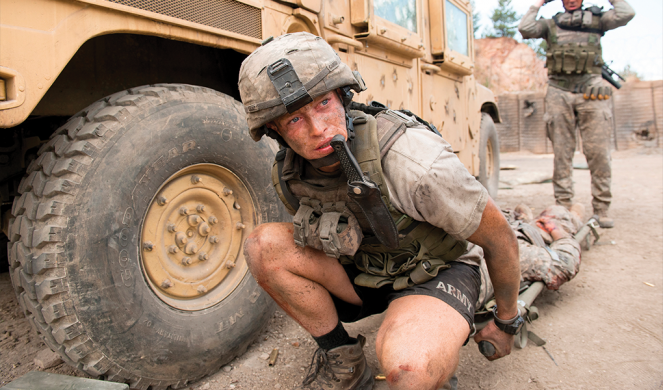 This cultural faith, which has so little to offer in the face of death, might in itself offer some insight if we follow it to its ultimate futility. But that doesn’t seem to be director Rod Lurie’s purpose. Every time he nears the cusp of mining something more profound from these real events, he shifts to some other scene or interaction.

Eventually a moment comes that stirs viewers’ hearts with empathy and gratitude. It’s as the credits roll: Tapper sits down with the men who came back from Combat Outpost Keating to tell us about the fallen. As we see the faces of those who didn’t make it home to friends and family, we finally see they were not mere types—their experiences weren’t trite.

Sgt. Christopher Griffin was real. So was Pfc. Kevin Thomson. As their brothers’ jaws tremble, trying to restrain tears while remembering them, we remember these men we’ve never met too.

Megan is film and television editor for WORLD and co-host for WORLD Radio. She is a World Journalism Institute graduate and author of Beside Every Successful Man: A Woman's Guide to Having It All. Megan resides with her husband, Brian Basham, and their two daughters in Charlotte, N.C.