YouTubeMary Gatter in a Center for Medical Progress video 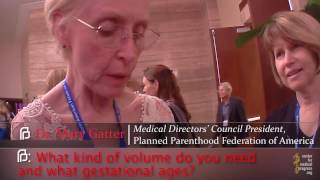 The Center for Medical Progress published the video online as part of a series of recordings from a conference for abortion providers in 2014. The first video in the series, posted online March 29, showed an abortionist talking about how delivering second trimester, intact babies for organ harvest could result in the babies’ inadvertently being born alive.

The latest video brings back a familiar face from previous CMP coverage: Mary Gatter. Footage released in 2015 showed Gatter, the medical director of Planned Parenthood in Pasadena, Calif., negotiating the price of donated baby body parts and infamously quipping, “I want a Lamborghini.”

In the new video, from a prior conversation between Gatter and CMP director David Daleiden, Gatter asks Daleiden, who was posing as a fetal tissue procurement agent, “What kind of volume do you need, and what gestational ages?” She also clarifies that procurement agencies routinely provide staff to harvest the organs of aborted babies on-site, meaning it costs Planned Parenthood almost nothing.

Federal law allows the donation of aborted fetal tissue for research purposes, but it prohibits the sale of it for profit. The law only allows fetal tissue companies to reimburse providers for expenses related to collecting the specimens.

“The fact that [tissue procurement companies] stationed their own workers inside Planned Parenthood abortion clinics to perform the harvesting, packaging, and transport of aborted baby body parts demonstrates that Planned Parenthood had no reimbursable costs under the law,” Daleiden said.

CMP began releasing undercover videos from its investigation of Planned Parenthood in 2015. Since then, Congress has investigated both the abortion provider and several tissue procurement agencies and referred them to the Department of Justice for prosecution. Meanwhile, Daleiden has faced prosecution from local jurisdictions, including current felony charges in California for allegedly violating the state’s law on recording private conversations. A Texas judge dismissed misdemeanor charges against Daleiden and his colleague Sandra Merritt earlier this year.

Daleiden still has unreleased footage from National Abortion Federation meetings that was quashed by a federal judge’s gag order. The video released this week was not subject to that order. A CMP spokesperson said the organization hopes the new videos can inform the ongoing debate in Congress about defunding Planned Parenthood.

Lynde is a WORLD Digital's managing editor. She is a graduate of World Journalism Institute, the Missouri School of Journalism, and the University of Missouri-St. Louis. Lynde resides with her family in Wichita, Kansas. Follow Lynde on Twitter @lmlangdon.