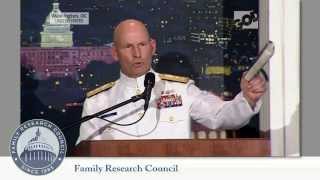 “Faith in the military took center stage Thursday at the 62nd observance of the National Day of Prayer in Washington, D.C, as lawmakers and faith leaders gathered on Capitol Hill.”

That was the lead paragraph of WORLD’s May 2013 article on the gathering that made U.S. Coast Guard Rear Adm. William “Dean” Lee (later promoted to vice admiral) known beyond military circles (see a video of the speech above).

Here’s more from that report by J.C. Derrick:

“Lee told the crowd he had 10 minutes of carefully prepared remarks, but he decided to leave them in his chair and ‘speak from the heart’ instead. Lee, who described himself as ‘a man of deep abiding faith who happens to wear a uniform,’ went on to defy any efforts to stop military personnel from openly sharing their Christian faith.

“Lee mentioned last year’s record high number of military suicides, 349—roughly one per day—and said every 65 minutes a military veteran will take his or her own life. ‘I want you to remember that number,’ he said.

“He recounted a recent meeting with a 24-year-old sailor who had attempted suicide but survived his self-inflicted gunshot wound to the head. Lee said when he heard the man’s story, he knew the rules said he should send the man to a chaplain, but his heart said to give him a Bible.

“‘The lawyers tell me that if I do that, I’m crossing the line,’ Lee said. ‘I’m so glad I’ve crossed that line so many times.’

“Lee pledged not to back down from ‘my right under the Constitution to tell a young man that there is hope.’

“Lee received several standing ovations during his brief remarks. He requested prayer for Christian military personnel to ‘weather the storm that I am almost certain will come.’”

Here’s an excerpt from J.C.’s recent interview with Dean Lee, where he talks about that day in May 2013 and the risk he took in taking a stand for religious liberty in the military. —Marvin Olasky

Did you grow up loving the water? Yes. My dad loved to fish, as did his father. I spent many summers down at a little place called Topsail Island, N.C. It’s where I caught my first fish. I’ve been hooked ever since.

What’s your favorite Coast Guard memory? My favorite memories are when we succeeded at something that was hard—saving somebody’s life. Although I was never the person who actually yanked them out of the water, I often got to tell the family, “We got your loved one, and they’re safe and sound.” There’s no price you can put on a privilege like that.

How were you chosen to represent the military for the 2013 National Day of Prayer? A friend nominated me. I said I’d do it out of a sense of duty. I didn’t want to because I knew there might be some danger associated with it. Any senior officer is aware of lines you can’t cross on expression of faith, or you’ll have one of these watchdog groups coming after you. I knew speaking at that event in uniform would probably draw the ire of one or more of those groups.

What happened at the event? Each of the warm-up speakers had gone over, so when they got to me, there were only two or three minutes left. The moderator told me, “I’m sorry, Admiral, but we don’t have time to get to you before the keynote. We’re going to flip-flop you and Pastor Greg Laurie.” What I heard: “I’m sorry, Admiral, we don’t have time for you today.” I set my notes down and listened to Pastor Laurie give a phenomenal sermon. He ended right at noon, and everybody’s clapping. Then Dr. James Dobson starts to introduce me. I can’t tell you the panic that ensued in my head, because I didn’t think I was speaking. I felt something telling me to leave the notes and speak from the heart—so I did. I walked off the stage 14 minutes, 25 seconds later quite certain that I was going to be fired.

What was your message? I threw down hard about the erosion of religious liberty in the military. There is a seed of fear that’s been planted through the years, and it’s been growing so that now you’re almost afraid to say anything about your faith. I had refused to do that because as a man of faith I feel like I need to take my faith with me into the workplace. I’m against proselytizing in the workplace, but as a leader, sometimes you’ve got somebody in your office who is down and out, and I felt compelled to tell them the only answer to their problem: Go to God. I would say grace in my own mess (a kitchen where officers eat), but I asked if anyone had any problems with me giving thanks. Nobody ever did. I had a Bible on my desk for the last half of my career, including multiple commands. It was important to me because that Bible made a statement about who I am, and it also made a statement to anyone coming in my office: It’s OK to talk about it in here, if you want to.

How did the audience respond? Within a minute I had a standing ovation. And then another standing ovation. That kept feeding the beast, and the clock kept ticking. After the event, as my wife and I ate lunch, we started to get giddy, because we knew now we’re probably going to get to retire. By the time I went back to work the next Monday, my remarks were being passed around prolifically on all forms of social media. I was starting to get inundated with emails, and some people wanted my head. But for every one of them, there were 10 people expressing support.

Did trouble come? I knew I was going to see the commandant [Admiral Robert Papp Jr.] because I was stationed at headquarters, and every morning we had an operations brief. As we broke up from the meeting, the commandant made eye contact and started walking over toward me. The other admirals parted like the Red Sea. I’m thinking: Here it comes. What happened in those few moments is one of the greatest displays of leadership that I experienced in 35 and a half years of active duty: He reached his hand out, shook mine, and said, “How are you doing, Dean?” I said, “I’m doing fine, Admiral. How are you doing?” He goes, “I’m doing well.” Then he looked at me and said, “You have a great day.” Nothing else was ever said about it. I presume he was taking some heat from within the government, but he never worried me with any of it.

Can more religious freedom help battle the high rate of suicides in the military? It’s a great tool. If we train a ready force of men and women that we may have to send to war, but don’t also make them spiritually fit, we are failing them and we are failing our country. I’ll never deviate from that view, and I don’t care how many watchdog groups are out there nipping at our heels.

What’s the solution? Adhere to the Constitution. It is a beautiful document. I love the way our Founding Fathers wrote the First Amendment: Congress shall enact no law respecting the establishment of religion, nor prohibiting the free practice thereof. You practice whatever faith you want. I loved serving with men and women of all faiths and no faith. If someone wants to practice or talk about their faith in the workplace, as long as they’re not proselytizing or discriminating, then it should be OK.

And you were willing to risk your career for that freedom? Before moving to three-star [vice admiral], you have to take a course called Pinnacle, and there they told us to think about what principle we would be willing to throw your stars on the table for. Within a few months, I found that principle: religious liberty. I knew it the day I walked up on that podium at the National Day of Prayer. I was willing to throw my stars on the table over that. I would have accepted whatever happened in the aftermath.

But it didn’t come to that. About a year after the speech, after a change in commandants, I was selected to be the Atlantic Area commander. It shocked me. Although I was grateful to be considered, I didn’t think I’d ever get through Senate confirmation. But I got confirmed and served as a three-star—the greatest privilege in my life.

J.C. is a former reporter and editor for WORLD.