STR/AFP/Getty ImagesA child looks through the fence at the Moria refugee camp on the Greek island of Lesbos.

Photo by Mindy BelzNahid and her dog Niko arrived on Lesbos on Thursday. 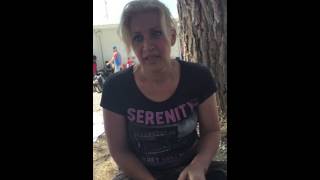 MYTILENE, Greece—The rest of the world may have grown accustomed to reports of refugees taking to leaky boats to cross the Mediterranean to safety. For those actually making the crossing the first time, it’s anything but routine.

“I am so scared,” cried Nahid, an Iranian woman who arrived on the Greek island of Lesbos today. “We prayed the whole time. He helped me, He helped me, Jesus helped me,” she sobbed (see video clip above).

The 29-year-old widow, a convert from Islam to Christianity, broke down as she described the fear, danger, and rough waters of the 8-mile crossing from Turkey to Greece. Nahid described her journey from the reception center at the Moria refugee camp, speaking just hours after Greek officials fingerprinted and registered her as an asylum seeker.

Nahid was among 104 migrants who arrived in Lesbos today, part of a continuing stream of migrants from the Middle East and Africa fleeing war and oppression. European countries and the UN Refugee Agency are downplaying the ongoing refugee wave, but numbers are up: At the beginning of July, average daily arrivals numbered 46. Now, since an attempted coup in Turkey sparked a massive crackdown there, arrivals have been numbering closer to 100 a day.

After becoming a Christian only recently, Nahid had been working in a church and said as a former Muslim she faced persecution. Without providing details, she said government security forces killed her husband. She was part of a group of 85 people making its second attempt to leave Turkey aboard an inflatable rubber boat.

Nahid stood out from the other migrants with her platinum hair and traveling companion: her dog Niko. He made the journey from Tehran to Turkey with her 16 months ago in the same crate she carried him in on the sea voyage. Nahid also traveled with her sister and her husband, who are also Christians, and their two sons, ages 13 and 16.

The women bore bruises on their arms from where smugglers, they said, forced them into a too-crowded boat. It blew up, she and others who were aboard told me, punctured by Turkish police, and they had to return to land. Another passenger on the same boat, Syrian Muslim Kalephe Omar, showed me video images taken on his mobile phone of the migrants, including at least a dozen small children, returned to a police detention center.

“The Turkish police are doing a lot of trouble for us,” Omar said. Once out of police detention, most of those passengers were willing to risk a second boat ride rather than remain in Turkey.

“They took us to dirty places and take our fingerprints and bring us bad food,” said Nahid. “We had to sleep outside.”

War in Syria, fear of ISIS, political oppression, and the general upheaval in the region have prompted massive displacement. More than 1 million refugees have launched from Turkey, Libya, and elsewhere over the past year, crossing the Aegean or the Mediterranean in unseaworthy vessels to find dreamed-of safety in Europe and beyond. Few of the new arrivals realize the rules have changed: Most European Union countries have closed their borders to migrants in recent months.

An EU-Turkey agreement penned in March means Turkey will—in exchange for EU aid—continue formally hosting migrant refugees, where they are closer to their countries of origin. That means those like Nahid and her family who arrive illegally may be trapped in Greece, housed in government refugee centers. The one at Moria, currently nearing capacity at about 2,800 refugees as of today, resembles an outdoor prison. Tall fences and razor wire surround the camp, gates stay locked, and the Greek police patrol is tight.

Police provide needed security and control, aid workers told me, but the atmosphere is tense and life remains hard.

Shortly after Nahid arrived, a fire broke out on the edge of the camp and spread quickly across an olive grove on a hillside adjacent to the entrance. Many aid workers calmly left the camp, part of a normal security precaution, while policemen and several aid workers from U.S.-based Samaritan’s Purse headed to the blaze with fire extinguishers. As firefighters arrived to control the rapidly spreading fire, refugees joined them, using their donated blankets to beat down the flames.

Mindy wrote WORLD Magazine's first cover story in 1986 and went on to serve as international editor, editor, and now senior editor. She has covered wars in Syria, Afganistan, Africa, and the Balkans, and she recounts some of her experiences in They Say We Are Infidels: On the Run from ISIS with Persecuted Christians in the Middle East. Mindy resides with her husband, Nat, in Asheville, N.C. Follow her on Twitter @mcbelz.